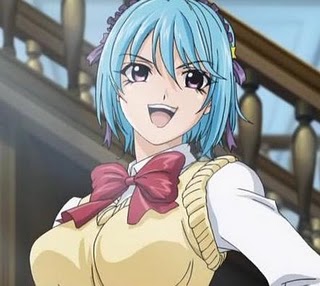 While she does continue to tease and try to seduce Chiisa, it is clear that she possesses true and honest feelings for him. Kurumu is shown to be a kind and soft-hearted girl as a comic relief character she aslo is in favor of a more typical "flirt" character, although the kind-heartedness is still present, and in reality, she is actually an innocent character. Despite this, an often running gag in both series is when she uses her breasts to seduce Chiisa, which, more often than not, makes his nose bleed and causes him to suffocate. She has a serious weakness for sweets. (somewhat like chiisa and pie but at a lower exstent)

Kurumu Kurono is the second most beautiful girl in Yōkai Gakuen. Therefore she is loved and admired by (almost) everyone. She is 15 years old and is about the same height as her rival, Moka Akashiya. All the girls at Yōkai Gakuen, (even Moka) are no match for her when it comes to her Sex symbol. She has light ocean blue hair and dark purple color eyes. At school she wears a different kind of uniform than most of her classmates. She weares a long-sleeve white blouse (which later becomes short-sleeved) with a tight yellow sweater (because she wants to be sure that everyone at school can see that her breasts are the biggest of all) and a bow tie. She has a yellow pleated checkered skirt and her favorite panties beneath it, are white with blue stripes. She also has a necklace with a shard of diamond which she (took) recieved from chiisa during TaShi's and Mizore's wedding party. (though she occasionally wears others) Her appearance doesn't really change when she transform into a succubus, she gets wings, a tail, and large sharp claws.

Described as a tough character, Kurumu sports a pair of bat wings, tail and razor-sharp nails in her true form, and has notable strength (seen when carrying people during flight, and slicing trees in half). Being a succubus, Kurumu possesses powers of 'Allure,' which she can use to hypnotize males. In most cases, Kurumu's 'Allure' only lasts for a few moments, but it has been shown to last a couple of hours on a single casting as seen on Tsukune. (before Chiisa showed up) According to legend, if a succubus kisses a male, he will then become her permanent slave; Kurumu admits, however, that she had never used this power beforehand, being young. However, after meeting Tsukune and Moka, Kurumu vows never to use her powers to win Tsukune over, wishing to capture his heart 'fair and square' (somewhat).Ironicly she ended up with chiisa without even kissing him. Later on, Kurumu displays further powers, employing the use of strong illusions to wrap vines around a slug Yōkai who was blackmailing her in order to take ecchi pictures of her and defeated him completely. Despite being sealed, Inner Moka was stunned that Kurumu displayed such power as the power of illusions is usually displayed by higher ranked succubi. As of the second manga serialization, she is learning basic witchcraft to help with the strength of her illusions and along with Mizore, she was trained by Ginei during the summer break in hand-to-hand combat in an effort for the two to become strong enough to overcome Inner Moka in a fight. She and Mizore are the same power level.

Community content is available under CC-BY-SA unless otherwise noted.
Advertisement